Setting up the plugins

In order to follow this tutorial, you need to install 2 plugins.

1. The Better Level Editor, made by 1Vader available here : Desperados.mod.io
He did an incredible job !

When it's done, it should be like that in your games directories

Now, Let's go do some modding !

Start the game and load the DLC Plantation level.
If you don't have this map because of the DLC, the best choice would be to take Casa DeVitt.
A map with Isabelle, but without Doc. You'll see why later.

And now, press F1. You should see this : The plugins made by 1Vader !! 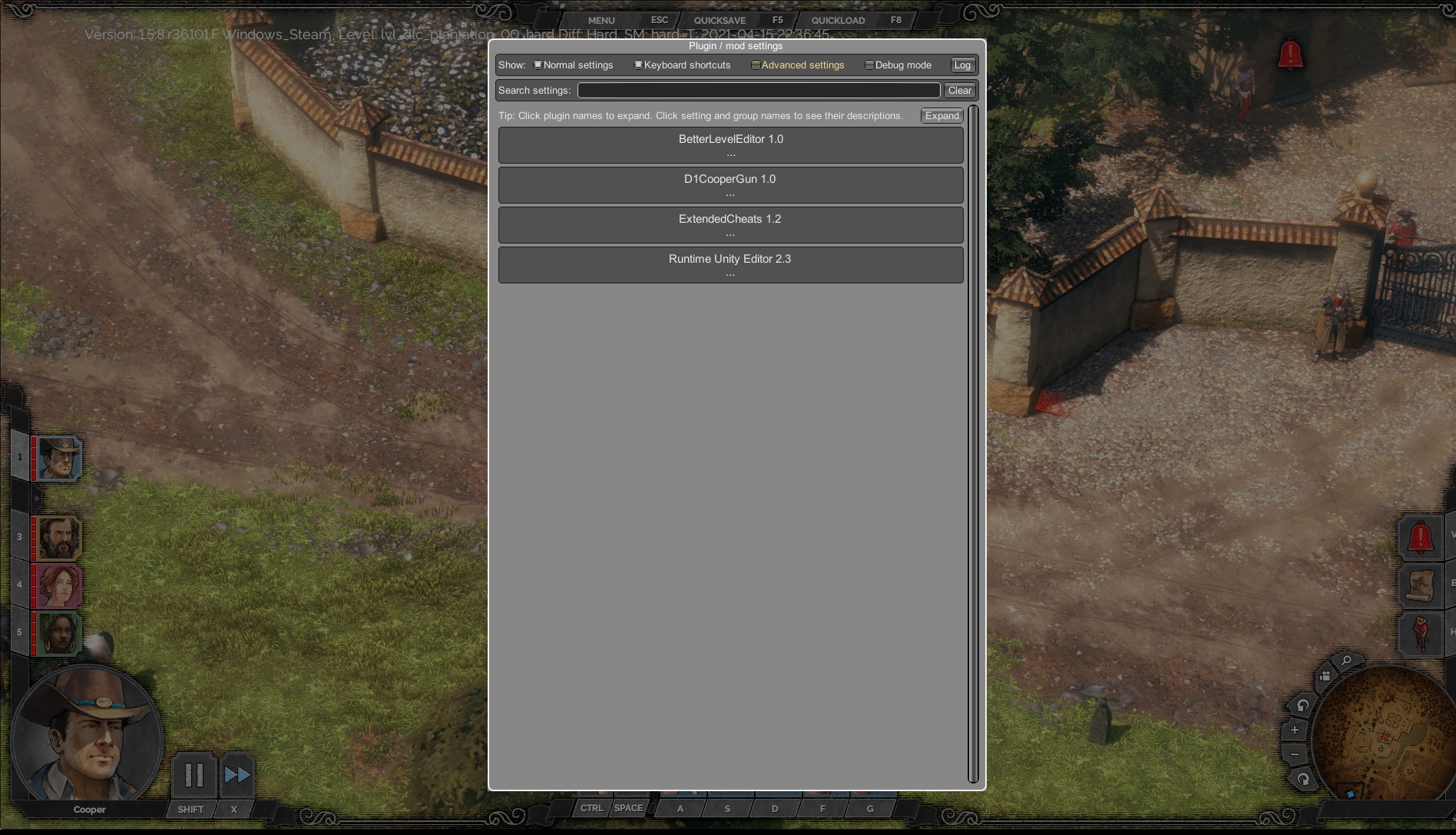 Now click outside, and press F2. It's a plugin to spawn characters and objects ! Press F2 to close (I believe it's that way) 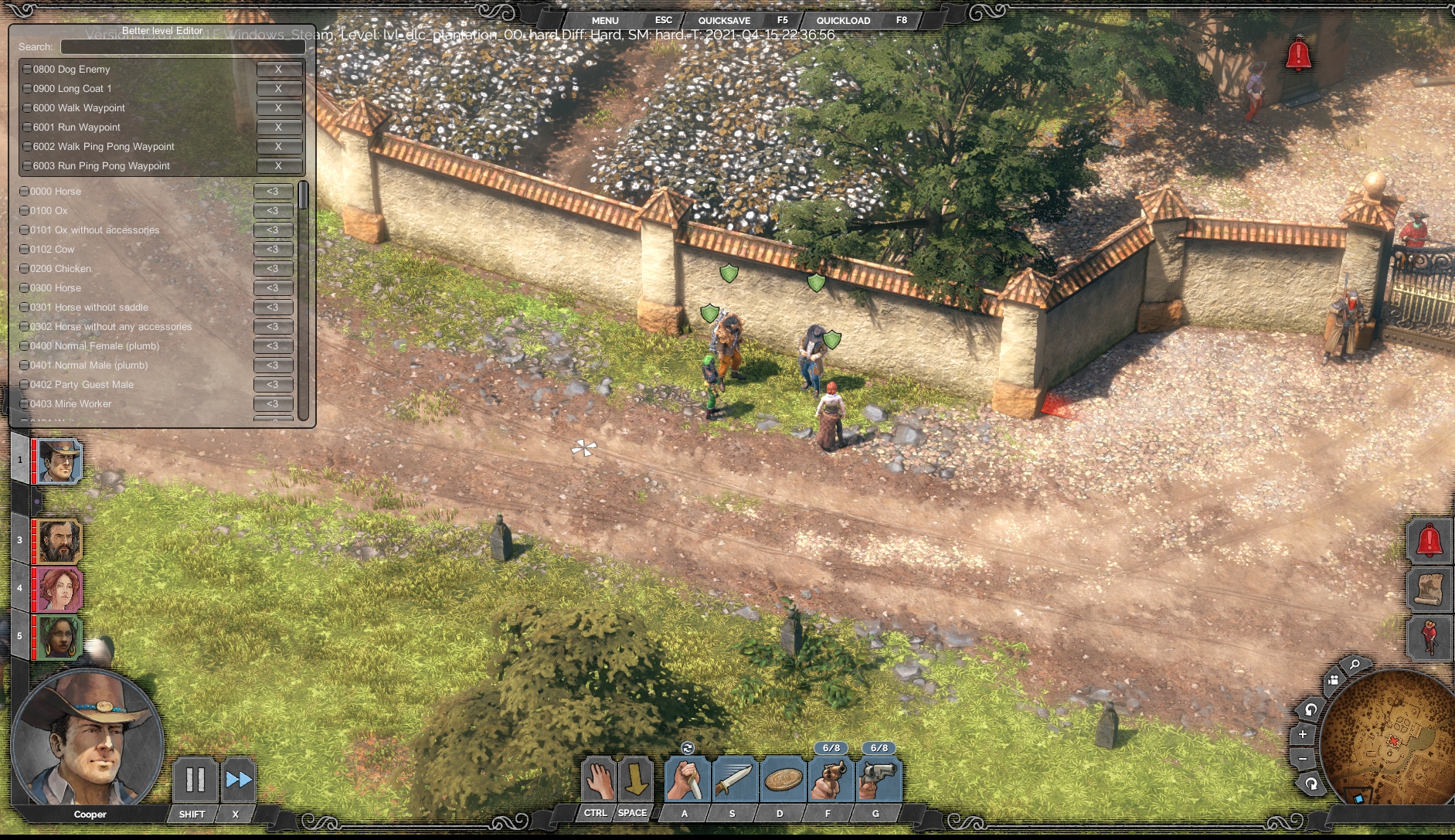 F12 is also used for the screenshot in the game. If you open the better level editing plugin with F1,
at the bottom, there is a section about the RUE. You can change the key to show/hide it. I set mine to F4 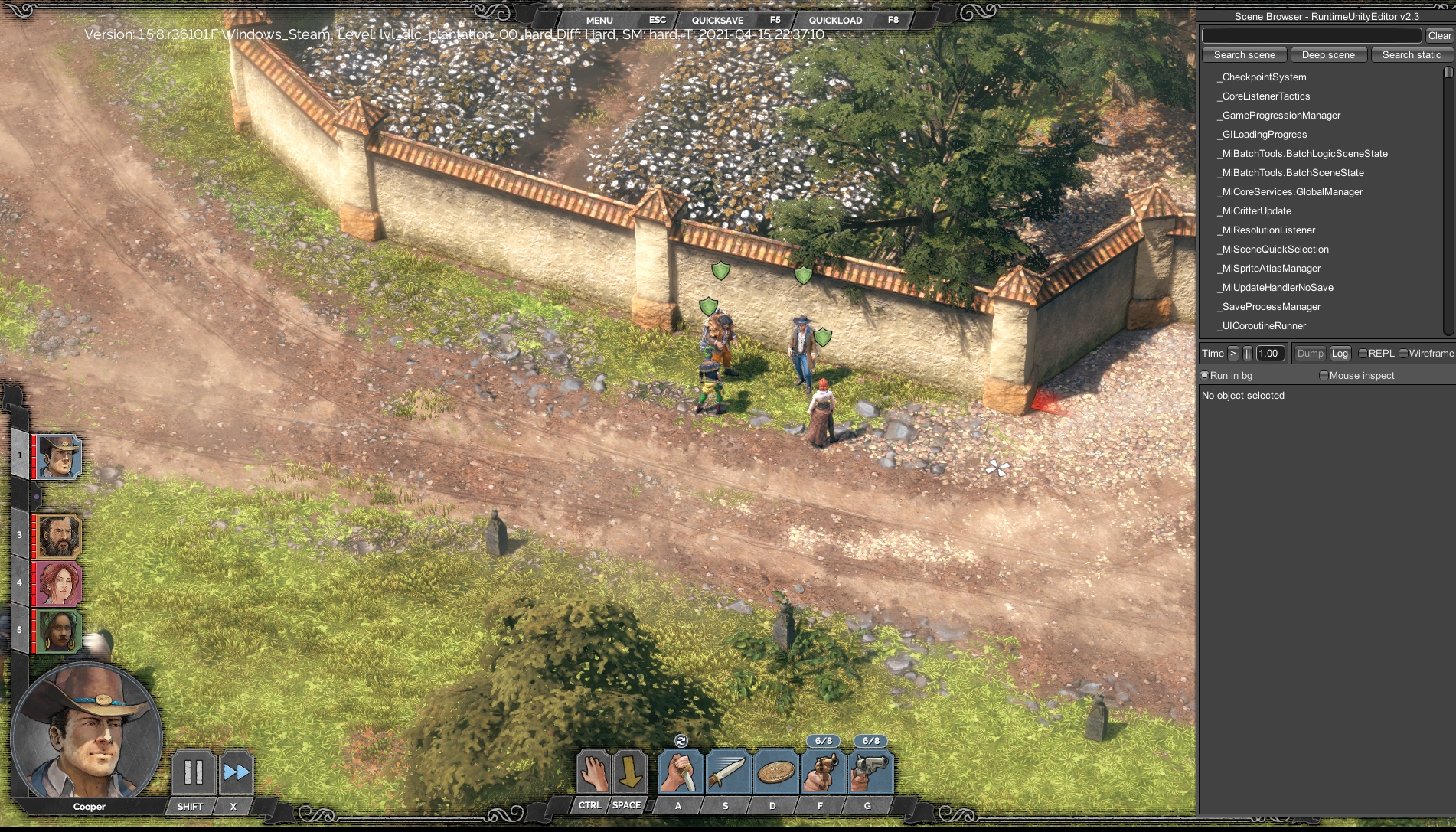 Now, what we are going to do, is to remove Isabelle from the map 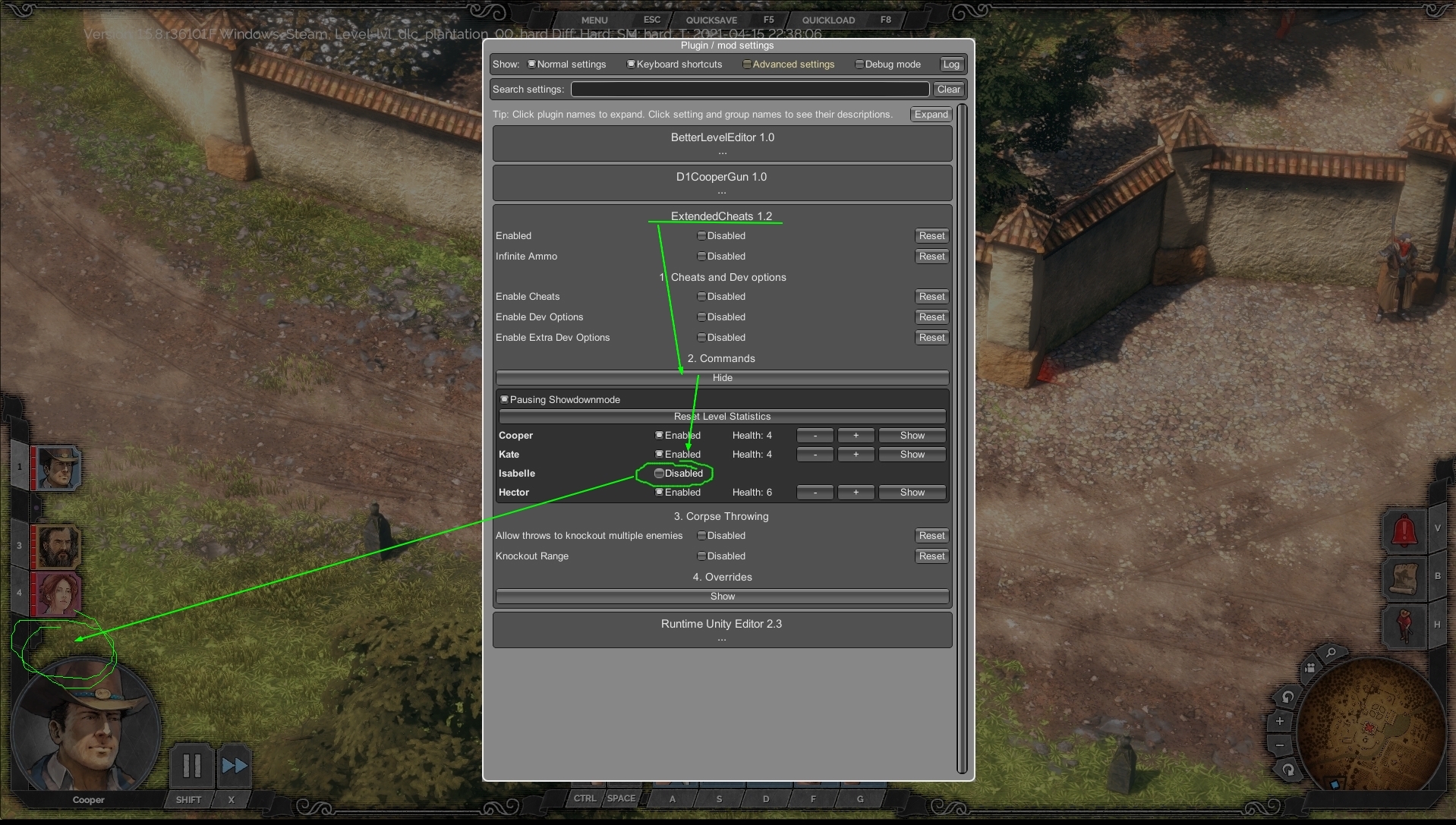 Click outside the box to close. Now you should see that the face of Isabelle is not here on the left side. We can not select her anymore.
But her body is still there on the map with the others.
We disabled her "mind". We also need to disable her body.

Press your key to open the RUE.

Keep the search textbox empty and press "Deep Scene". I'm not sure but I think that what it does, it's that it scans every objects present in the level.
Sometimes I need to find an object but I don't find it, so I make a Deep Scene.
But before doing Deeping, clear the Search TextBox, cause it might crash otherwise.

Now that the scanning is done, write in the search box : "ply_voo" and press Search Scene. 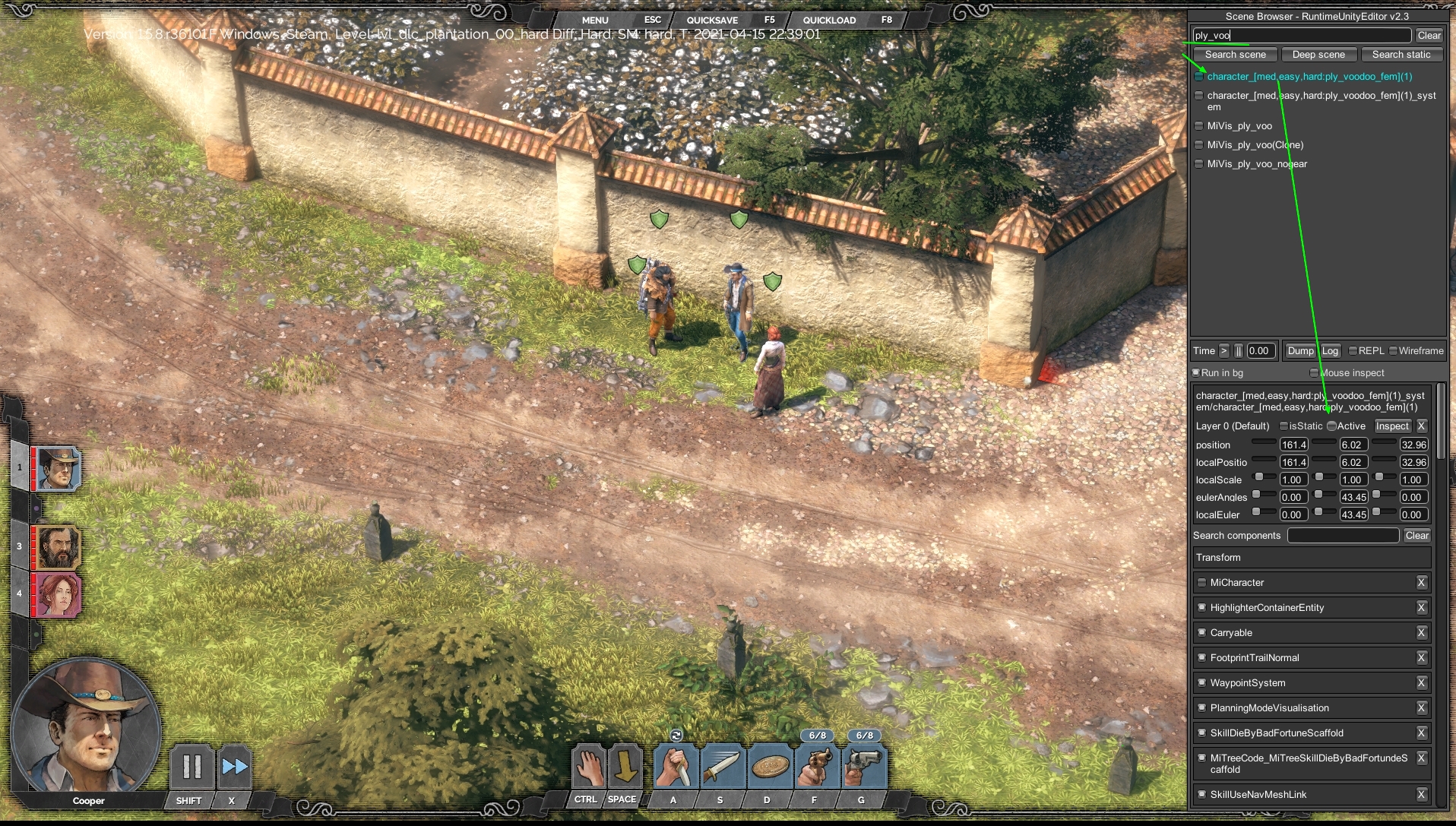 We can see that some objects have been found. Select the 1st or 2nd result
(the 1st result is actually a sub-object of the 2nd ending with "system")

Once it's selected, uncheck the box Active.

Do not remove the object using the X on the right.
It will remove the object, so it will accomplish what we want in a way, but it will corrupt the save file of the game,
because this level needs to have the Isabelles objects in. So, just deactivate it is enough.

You can remove objects, but only if it's objects that are not in the map originally.
For example, you spawn a Gatling gun, but you realized later you don't want it anymore. You can search for the gatling in the RUE and remove it with the X

Now Isabelle is gone ! But there is a little problem. The Neutral zone icon is still here.
There are 2 ways to get rid of this. The simplest one would be to re-enable Isabelle and to teleport her in a not-neutral zone.
The other way would be using the RUE. Inspect her main object, then in the components search for a Character components and disable the neutral zone.
Then, redo what we just did to disable her control and to hide her body.

If you want to hide others playable characters, searching with "hard:ply_" could be enough to find results.
It should be approximately like that :

Cooper : ply_coo or ply_cop (it depends of the levels)
Doc : ply_mcc
Kate : ply_kat (I think it could be a bit different depending of her disguise)
Hector: ply_tra

So, we removed Isabelle, but I would still like to play with her cat Stella.

Search for Stella, select her, then with your mouse, click somewhere in the map, and press F3 to spawn Stella. Yeah ! 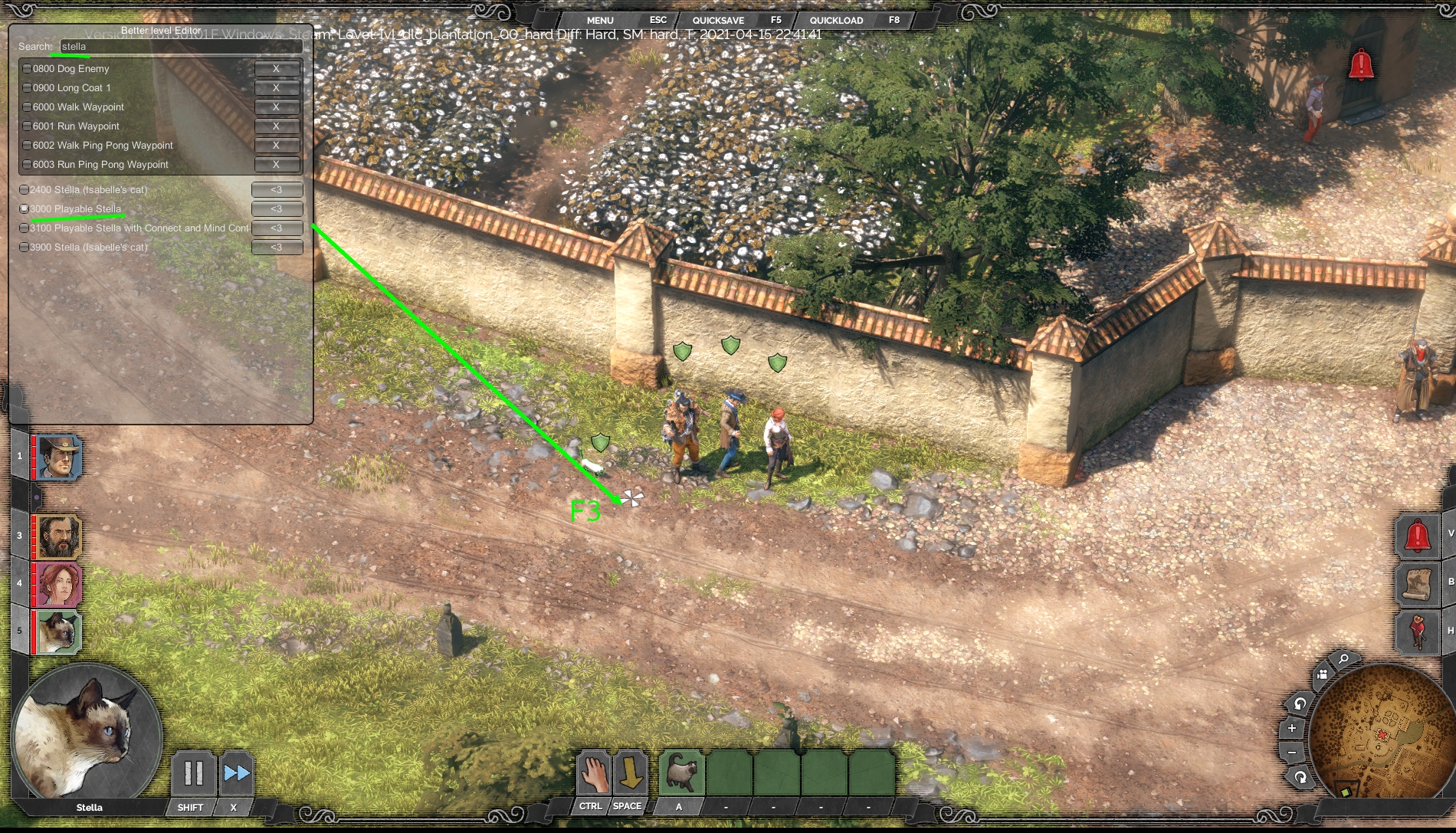 Now, we are going to add another playable character : Young John Cooper !

In the same box of the plugin to spawn objects and characters, do a search with the word : "young"
Select 3600 Young Cooper.
Then, like for Stella, click somewhere on the map and press F3. Here is Johnny. 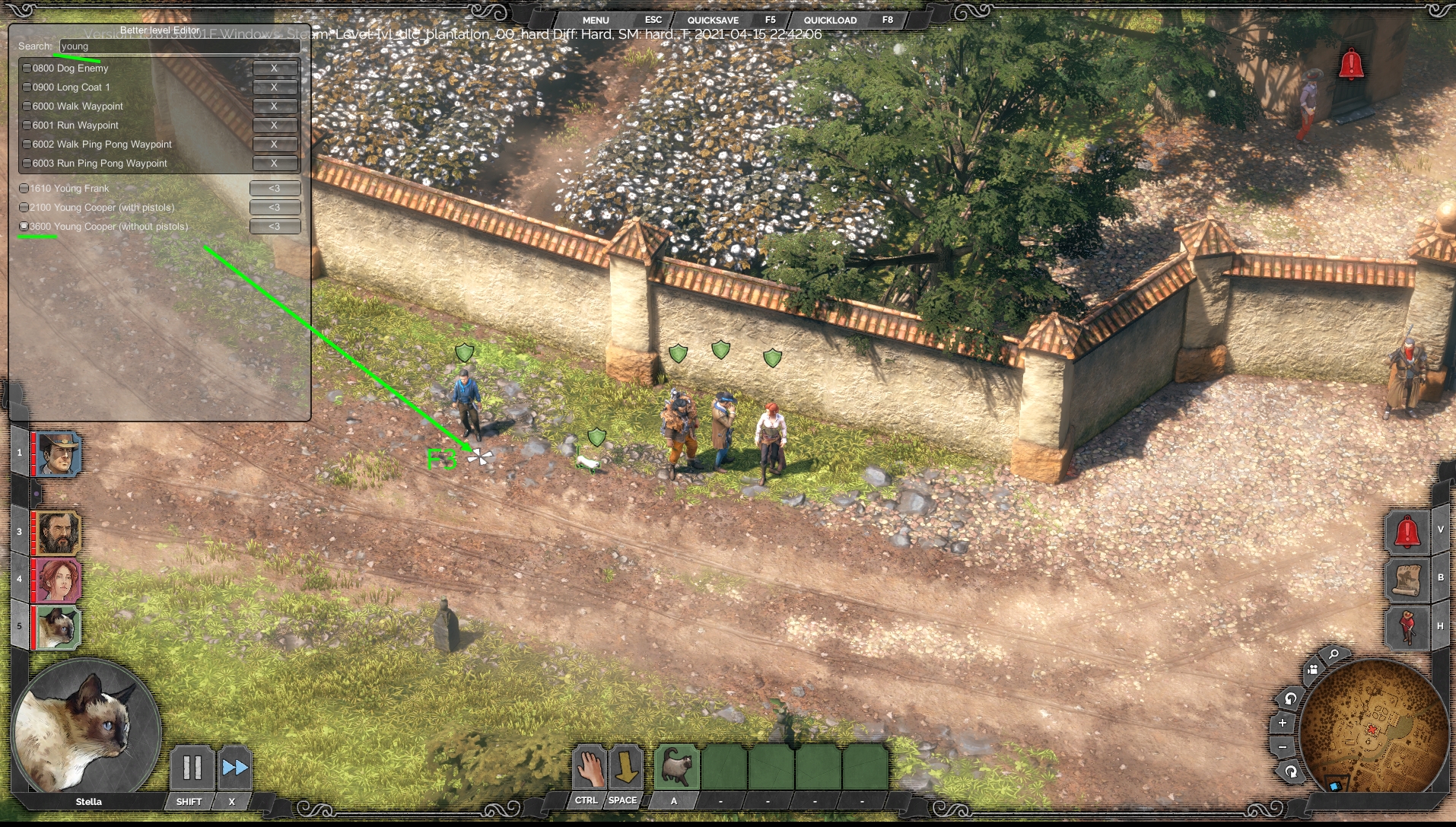 But now, there is a little problem. When you press 1 to select Cooper, you kind of select 2 characters. 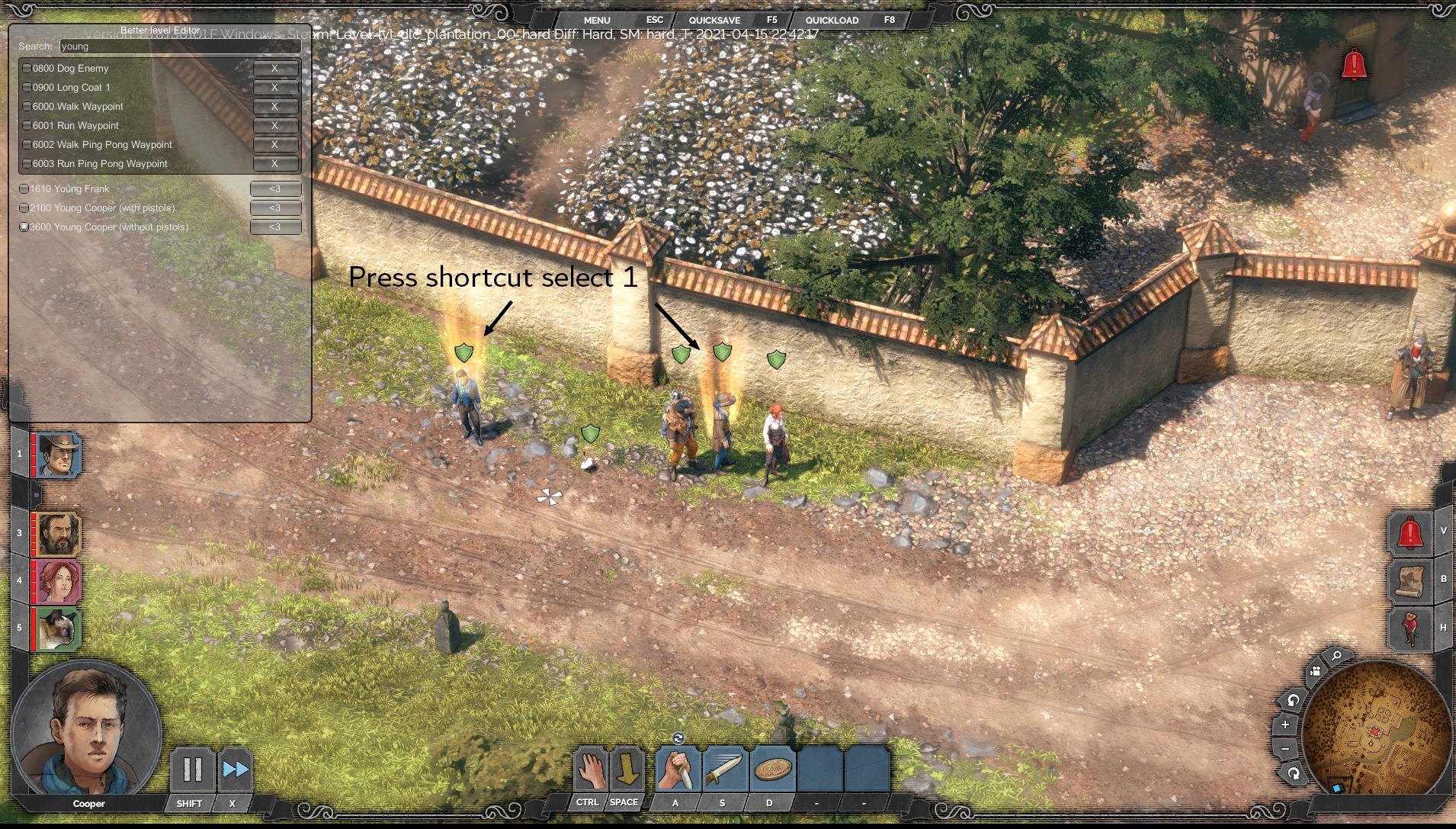 To solve this, we are going to use the key 2 that is normally used for Doc.

First, open the Better Level Editor F1.
Check the 2 boxes as shown in the picture below : Enabled and Enabled cheats.
It allows you to use short cut keys to perform some modding, as explain here : Desperados.fandom.com

Like F10 to teleport, or pageup/pagedown to make a character visible or not 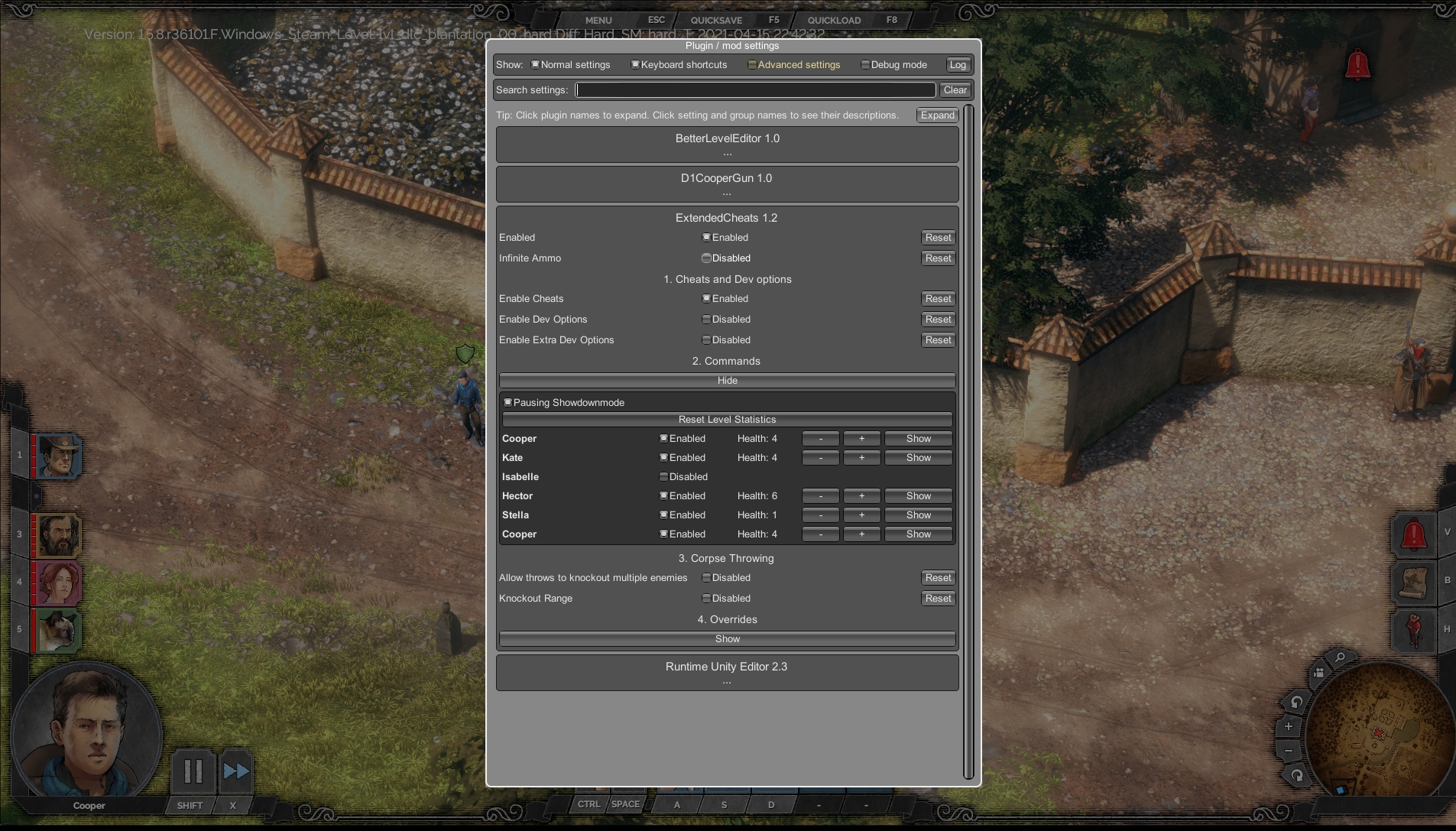 We are going to use this enabled shortkey modding to identify the object of young Cooper.
Place your mouse on young Cooper and press PageUp.
He is already visible by default, but by doing this, there is a little log message that appears, that says:
character_base(Clone)(MiCharacter) is now visible.

If you do the same thing on Stella, the same message will appear.
If you do this on Hector, Kate or John, it will show a different name, like the one we saw earlier for Isabelle in the RUE. 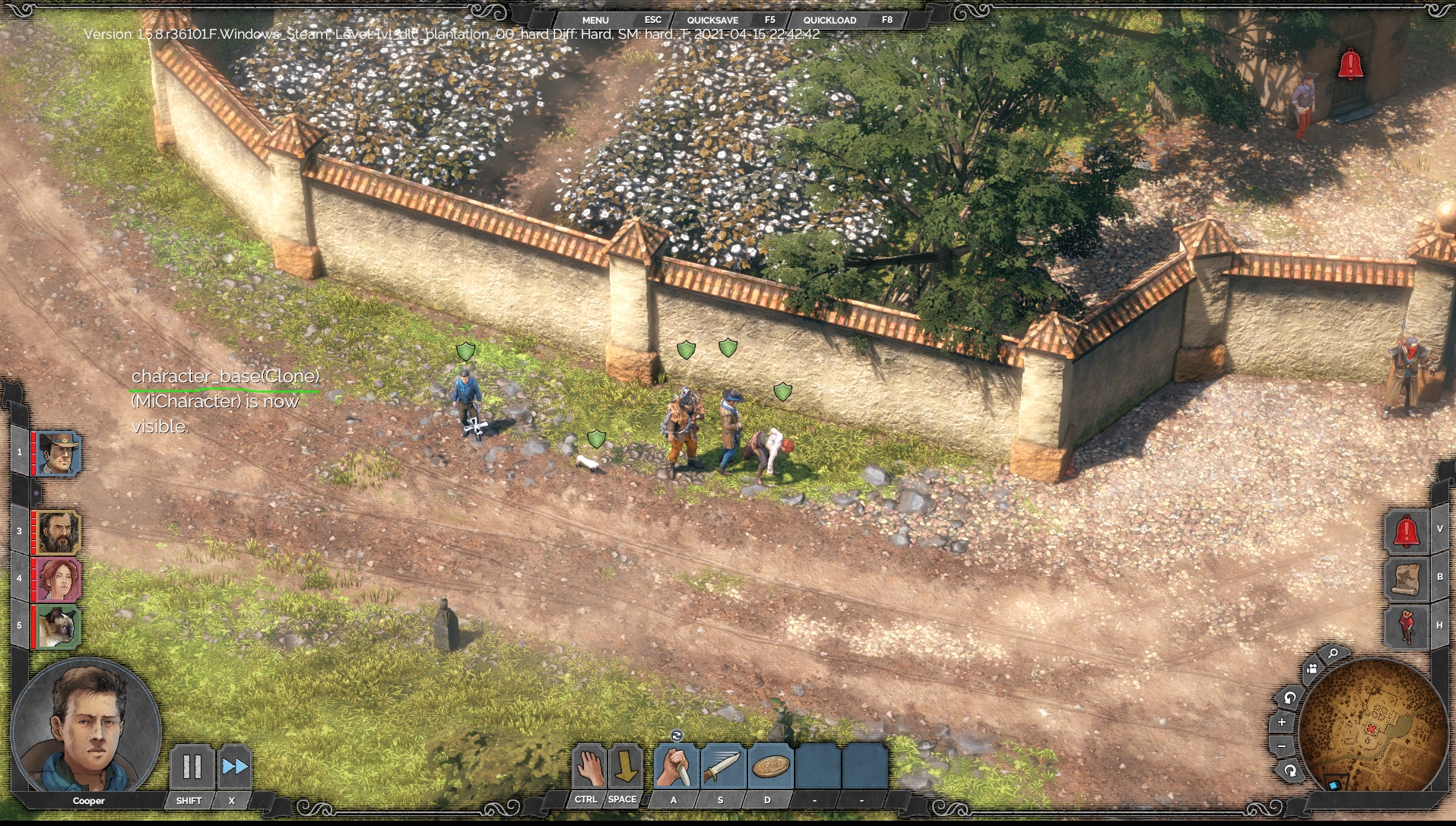 Open the RUE, do a deep of the scene, and search for : "character_base(Clone)"
It will show 2 results. The first is the spawned Stella, the second is the spawned Johnny.

Select the 2nd for Cooper, and click the button "Inspect"

Then, Click on the button "Components" that countains 15 "sub" components 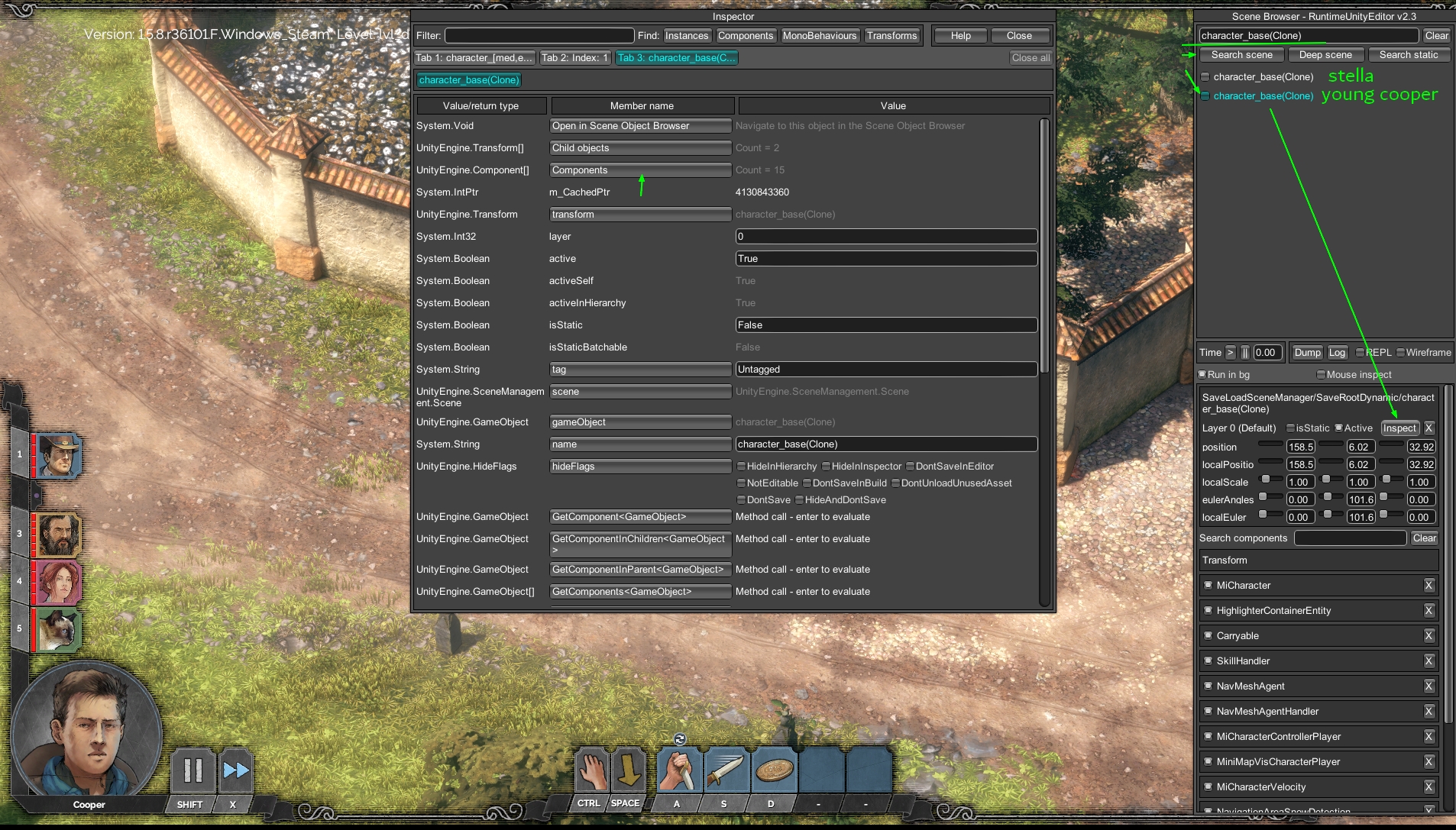 Then Click on the large button "Index: 1" which is for the MiCharacter Component 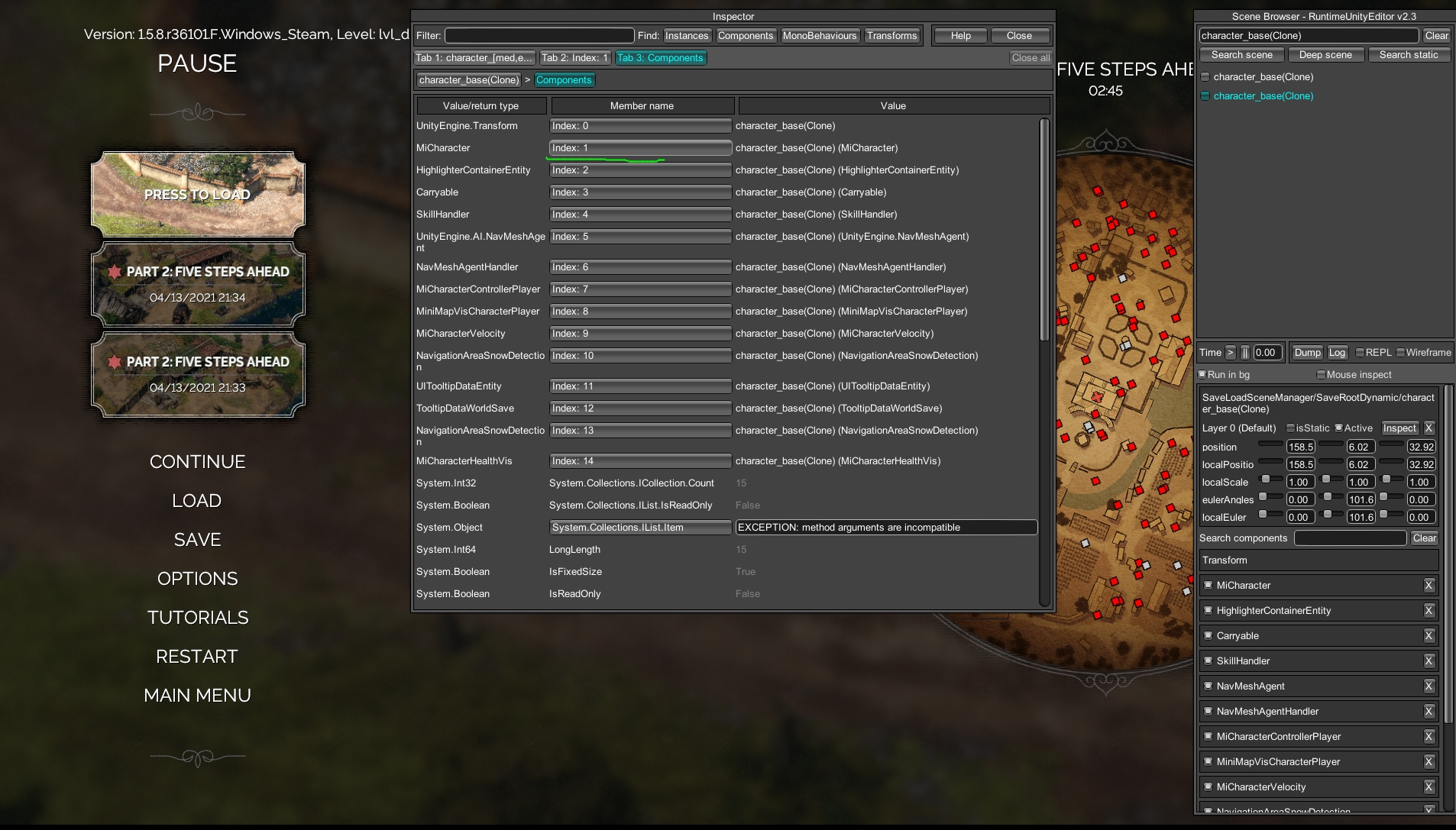 Then, click the button "m_controller" that is the component MiCharacterController.
We are going to change something in the Controller object. 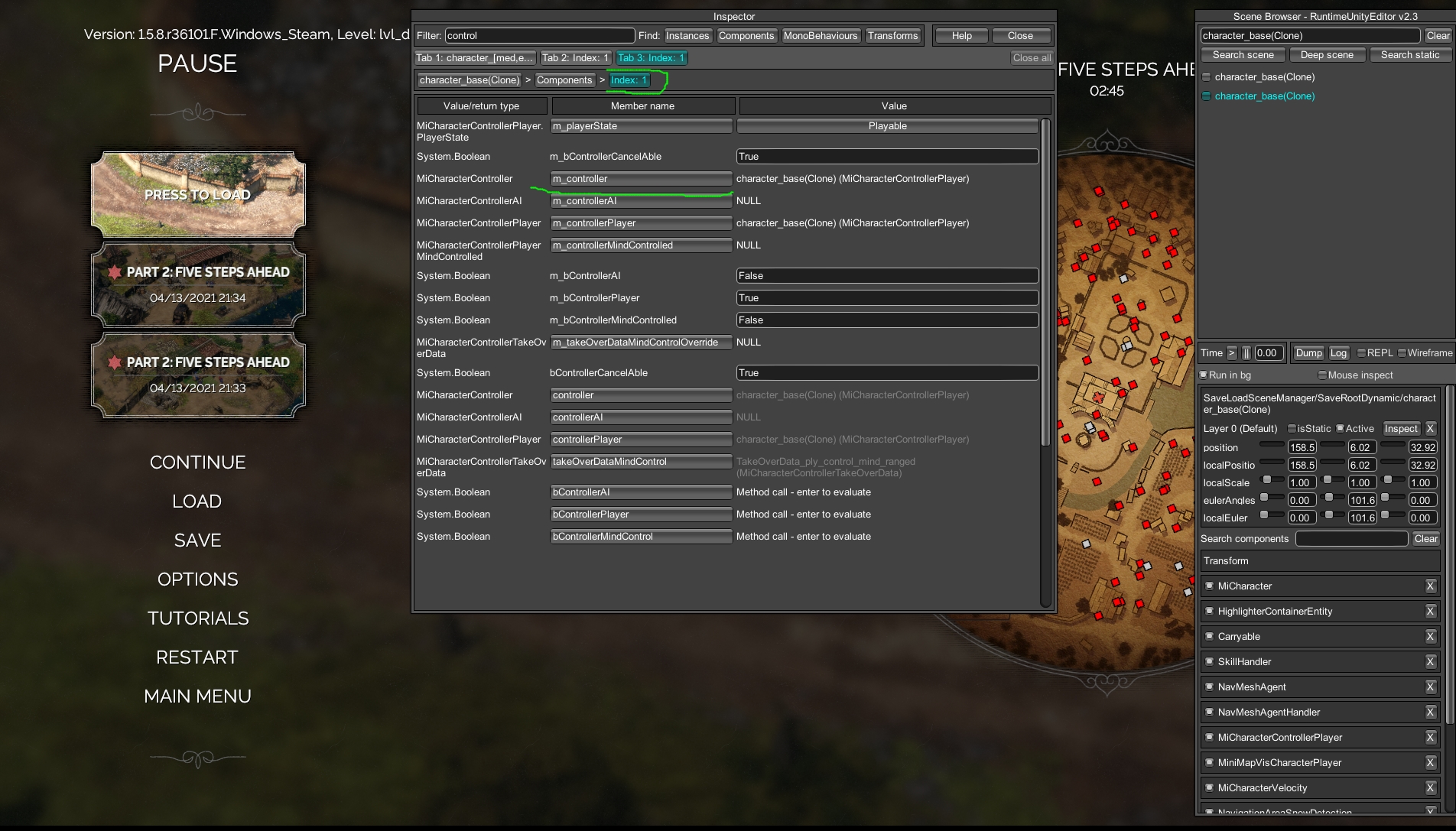 Now, for the row that is underlined, the member_name : "m_eSelectionInput", click on the large button of the column "Value" that for now, contains the value : CharacterSelectCooper. 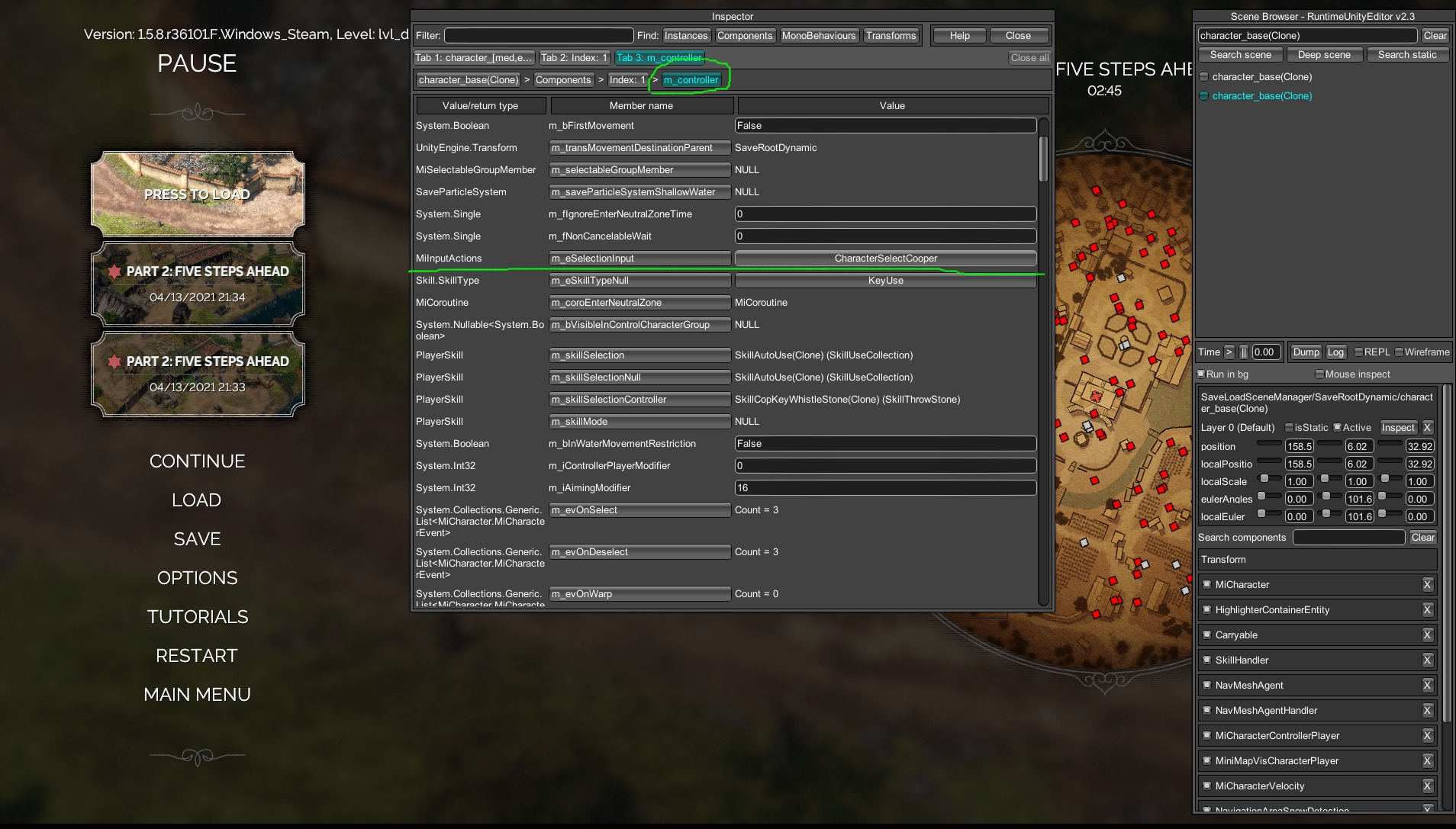 When you click, there is a dropdownlist that appears, with all the possible values possible. Select "CharacterSelectMcCoy".
Close the inspector and the RUE. 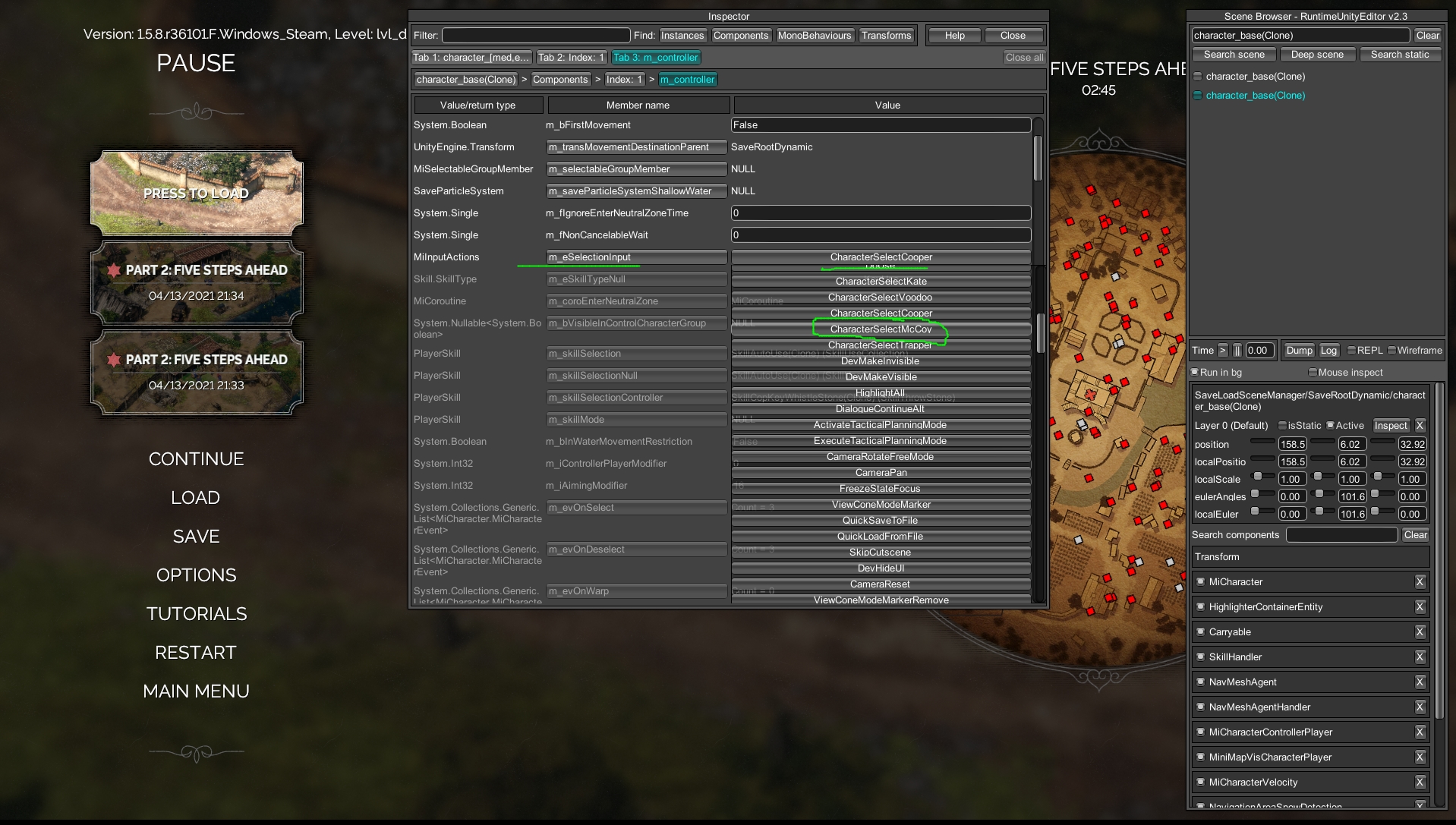 The small inconvenience is that it doesn't show young Cooper's face on the left side at the number 2 position.
Maybe there is a way. I haven't spent a lot of time on this.

Knowing that now, you can make some crazy teams like for example :

Or Kate with her 4 female cousins: the Servant, the Bride, the Dancer and the Fancy 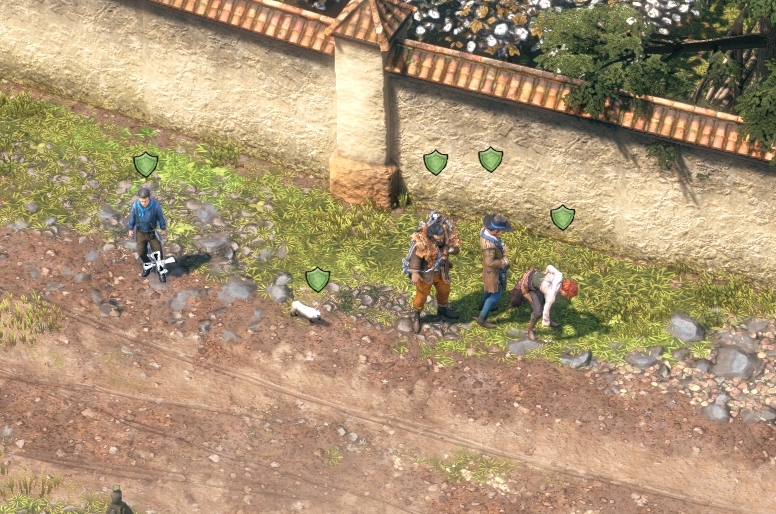 You don't need to download the attached file. It's just a zip of an image. I had to put a file to enable the page.

btw, if you use ytinu to install my mods, you can also just install UnityRuntimeEditor via ytinu. You only need to enable an option in the settings. I think it's called "show dev mods" or something like that.

Thanks. Great work you too. I've seen you've been mentionned in the latest video of THQ Nordic on youtube for your mod A night out :D

If you not sure what's the name of the object you can just press page down on it to make it invisible and it will give you the full name... Something like 'object name' is now invisible

yes, I know, I wrote that somewhere in this tutorial : "Place your mouse on young Cooper and press PageUp"

Thanks, waiting for next tutorials

I updated this page with the part to add young Cooper.
Did you manage to do what you want ?
Honestly, the hardest part is to install the plugins.